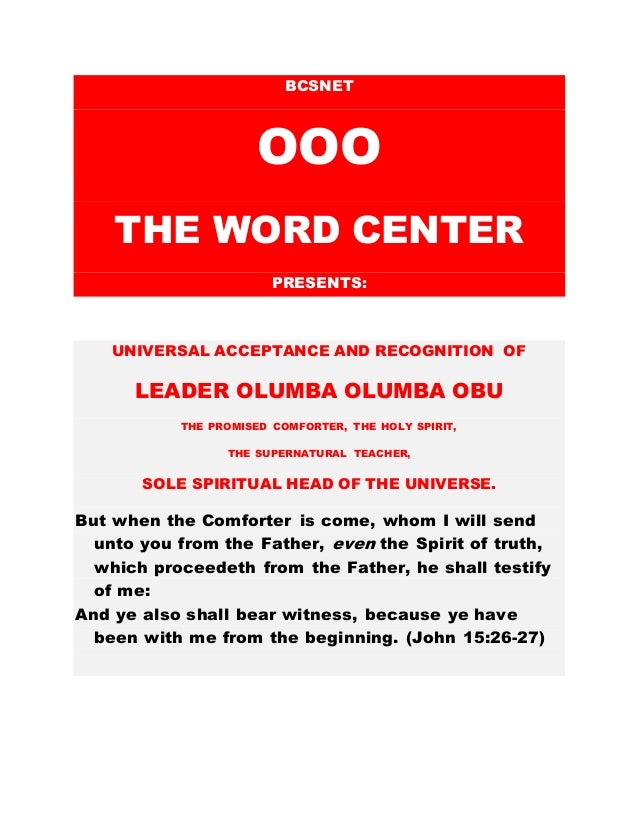 Doubtless he gave her much profitable instruction; and when the joy of her home was gone, Elisha prayed, and her son was restored to life. 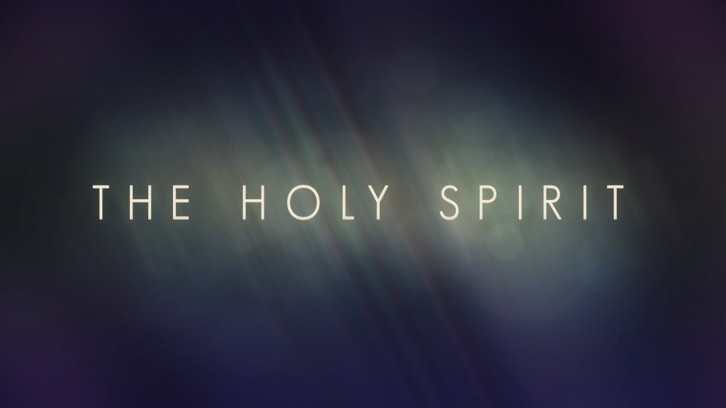 And never, never will you regret opening the door of your heart to welcome the Spirit. Joys never before known will He bestow — everlasting peace shall be the fruit of His indwelling. The term "Comforter" — includes the idea of help and strength afforded. A man is faint from loss of blood through some accident, a friend comes up and lends him an arm upon which he leans and thus reaches his home.

Or a man is carrying a heavy load, another comes and takes hold of it with him, so that the weight, before intolerable, becomes now comparatively easy to be borne. Or a little child is trying to open a door; the tears are just ready to flow because the attempt has been made again and again in vain — but a strong hand is put forth to help the feeble one, and the door flies open in a moment. In like manner does the Spirit afford His help.

He gives power to the faint, strengthening with might in the inner man, upholding the soul along the homeward path; He helps our infirmities, placing, as it were, His own shoulder beneath the load of our cares and sorrows. He takes away that which hinders. Many a door is too hard for Christian too open, his own corruptions block the way to the mercy-seat, so that prayer becomes a duty more than a pleasure.

Plans of usefulness seem unavailing through the perverseness or indifference of those for whom they are made — hence he is often cast down and ready to give up, but the Spirit is near to help, and in some way the difficulty is met and overcome. But the Comforter is also the Instructor of Christ's disciples: "He shall teach you all things. Only read the address of Peter — how clearly from Psalm and Prophecy could he tell of Christ; and then compare it with his counsel to our Lord a short while before, when he would have had him turn from that cross which was to be the means of salvation to the world.

Nor is the teaching of the Spirit confined to inspired Apostles, or to those engaged in the public ministry of the Word of life. All believers need it, and all may look for it. Do you desire to enter more into the full understanding of Holy Scripture? The Spirit will shine upon the sacred page, and bring the truth to light. It is no less than a perpetual miracle to see the change in this respect, when for the first time the Spirit is earnestly sought. A new meaning seems to start up in every part of the Word, almost in every verse, and those to whom the Bible had hitherto been little better than a dictionary find in it a fountain of heavenly joy!

Would you know more of your own true character? The Spirit will be your Teacher. He will reveal, gradually as you are able to bear it, the evil that lurks within.


He will reveal to you the selfishness, the pride, the unbelief, or the impatience that may be your chief snare — and while revealing, He will also enable you to resist and overcome it. Would you know more of Jesus? The Spirit will take of the things of Christ and show them unto you.

He will testify of His grace as the Savior of the lost. He will manifest to you His invitations and promises as reaching yourself and all the peculiarities of your own sin or temptation. He will enable you to see in Christ the good Physician exactly suited to your necessities.

UNIVERSAL ACCEPTANCE OF THE PROMISED COMFORTER

He will set Christ before you. But the Holy Spirit is also a Remembrancer. He recalls to the memory that which would otherwise be forgotten. Very interesting examples of this office of the Spirit may be found in two passages of this Gospel: namely, John ; But all believers need the work of the Spirit in recalling the truth to mind. For all that is evil our memories are very retentive; for all that is good they are very treacherous — justly compared to "leaking vessels.

But the Spirit in this grants His aid. He gives an increasing relish for heavenly things that makes it so much the easier to remember them. He brings back at the right moment a particular prayer, or promise, or precept — some act of Christ, or some feature of His holy character that may just then be requisite to counteract a temptation, or to support the heart through some pressing emergency. And even when the memory fails as to the very words of a passage, not seldom through the Spirit a savor of the truth abides which effects the very same result. For this blessed Spirit to be your Comforter, your Helper, your Teacher, your Remembrancer, let me entreat each reader of these pages continually to pray.

Our Father knows well that there is no gift which so honors Himself or brings such blessedness to His people, as His Spirit abiding in them. Hence there is no petition which He delights more to answer than for this. The old promise of Luke 11 is not yet worn out, and never shall be while a sinner remains to be saved or a saint to be made fit for the inheritance of the saints in light: "If a son shall ask bread of any of you that is a father, will he give him a stone? It was the era of other personalities. NOW IS Since He is a merciful Master, those twelve Apostles who followed Him forsook their wives for three and a half years.

By that single act they were consecrated. That was why immediately after the resurrection they were baptized in the Holy Spirit. From the day they received the Holy Ghost none of them defiled himself again. For that reason God used them to accomplish great works; and whatever they commanded in the name of Our Lord Jesus Christ, came to manifestation. Even Paul who did not see Our Lord Jesus Christ physically refrained from fornication, adultery, and other sins from the Unfortunately, after Peter and the other Apostles died, fornication continued among the unbelievers.

So, once again, there was no more, even a single house, clean enough for God to dwell among men. That is why many claim that the Holy Spirit ceased to exist with the exit of the Apostles of Christ. Where do you want Him to live, when all His houses are defiled? If a fornicator tells you he can achieve anything good, do not believe him. A fornicator had defiled the house of God, and is therefore, an abandoned property.

Nothing good can come from such a person. All he does is to perpetuate evil. All the evil spirits dwell in him. They use him to tell lies and commit all other vices. Now it is not too late to change. The Ethiopians have truly risen. Among the Deaconesses were some stark illiterates. They could not read and write but they have the Holy Spirit which wrought everything. God never said a woman should not speak because in Him is found both a man and a woman. Since God is indwelling in both a man and a woman, God is therefore all and in all and God is both man and woman and vice versa.

None is greater than the other. All the Mosaic laws That is why during advent of our Lord Jesus Christ He did not take cognizance of the commandments because they came from angels. You are witness that who is an heir to the throne is not different from the slave or servant. Nothing is evil after all but things loved by the flesh constitutes hindrances to God.

All the teachings I brought to you are not of men nor of angels. The supreme teachings reveal what God hates and what He loves. In the Roman Catholic Church, a woman is not allowed to preach. Many other places do not regard the women as anything. The reason is that they have not received the teachings of the Holy Spirit. The Holy Spirit teaches us that we are all brethren. Do not call anyone a fool. There is neither young nor old, white nor black, everyone is equal.

The Coming of the Comforter

Our Lord Jesus Christ You are aware of the fact that the teaching of the Holy Spirit has never been disseminated in many parts of the world, that is why when the women went abroad to preach, there was a stir in the churches. The women there agitated to their authorities for their right to preach because of what they had seen from our women.

The Archbishop of Canterbury almost granted them the concession but his friend in Rome advised that if he did that, he was no longer his friend. And so people have refused women the right to preach because of fear of persecution. But right now the Holy Spirit has come to remove this veil from your eyes. When your eyes are opened, you will realize that there is neither male nor female, young nor old but Christ is all and in all Gal We are God's building. We are the city of God. We are all the children of God.

Whether you are white or black, you should regard every person in the same way. This is what is taught by the Holy Spirit. There is no pastor, or bishop who will teach you that all men are equal. It is the Holy Spirit alone who teaches us the Brotherhood of man. You remember the first National Anthem which specified that "in Brotherhood we stand.

Since the first National Anthem was replaced by the new one, have you not observed how things have been with you? The Holy Spirit has come to liberate the whole of Nigeria and is He not worthy of our worship?

If we worship him would there be any wars or problems in Nigeria? God says you should call no one father because you have one father; all of you are brethren. What other name do you want? 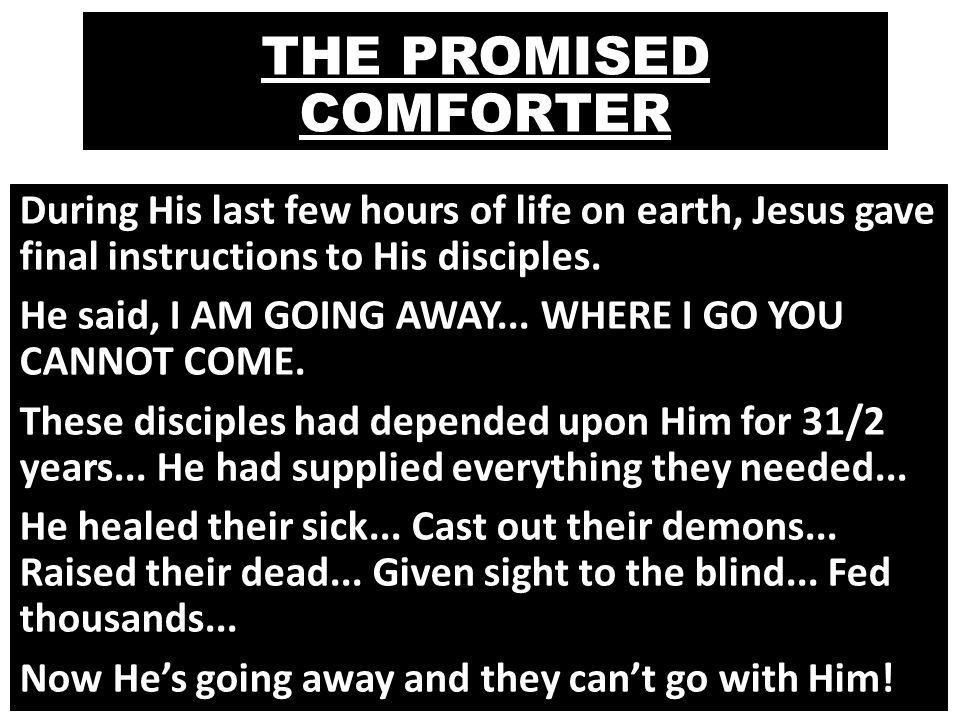 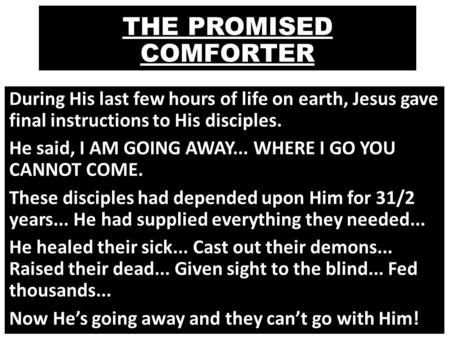 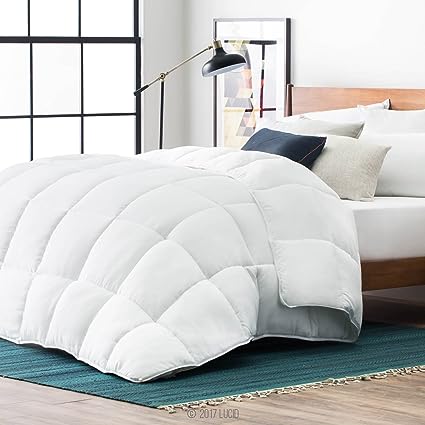